Qinhuai River has important historical and ecological values. The river creates a green belt that surrounds the city. Where Qinhuai meets Yangtze River the new city extension, Hexi will be build. The 94km2 area will accommodate mixed use development interlaced with a green network. Qinhuai River Park is 3 km long and 100 metres wide blue corridor.

Qinhuai River Park is designed as an extension of the new city in the form of a balcony with a view towards the river. Its strong relationship with neighbouring areas makes the network of paths, functional layout and program location visible.

The park is cut by the system of footpaths and squares, with one ongoing bicycle path and a boulevard on the riverside. The park extension towards the city is marked by triangular islands where trees are planted randomly. Between them canopies in the form of curved steel sheets fixed on conical masts create symbolical gates to the park. Additional paths planted with Ginkgo trees, connect adjacent streets directly with a riverside boulevard. They end with corten steel platforms perforated with gingko leaf patterns. Along the paths regularly planted rows of trees break the random arrangement of trees in the other parts of the park.

The park has quiet and intimate zones with a number of special gardens as well as bigger squares with public functional purposes clustered in buildings. A pergola garden is made of a long steel structure overgrown by white wisteria. Its inner form and distance between elements change in a playful way. The sport path connects fields with playgrounds and exercise equipment. It has a distinguished zig-zag form and a red-green color of the rubber pavement. A butterfly garden charms with abundance of ornamental flowers luring butterflies. A continuous wooden bench is placed on one side of the path that meanders through the garden. The rose gardens have planters made in a shape of the Chinese broken ice pattern. Every rose garden will host different species of roses within one color palette. A maze garden is composed from an organic arrangement of hedges and ornamental grasses. Hedges are pruned in the form of waves at different heights. 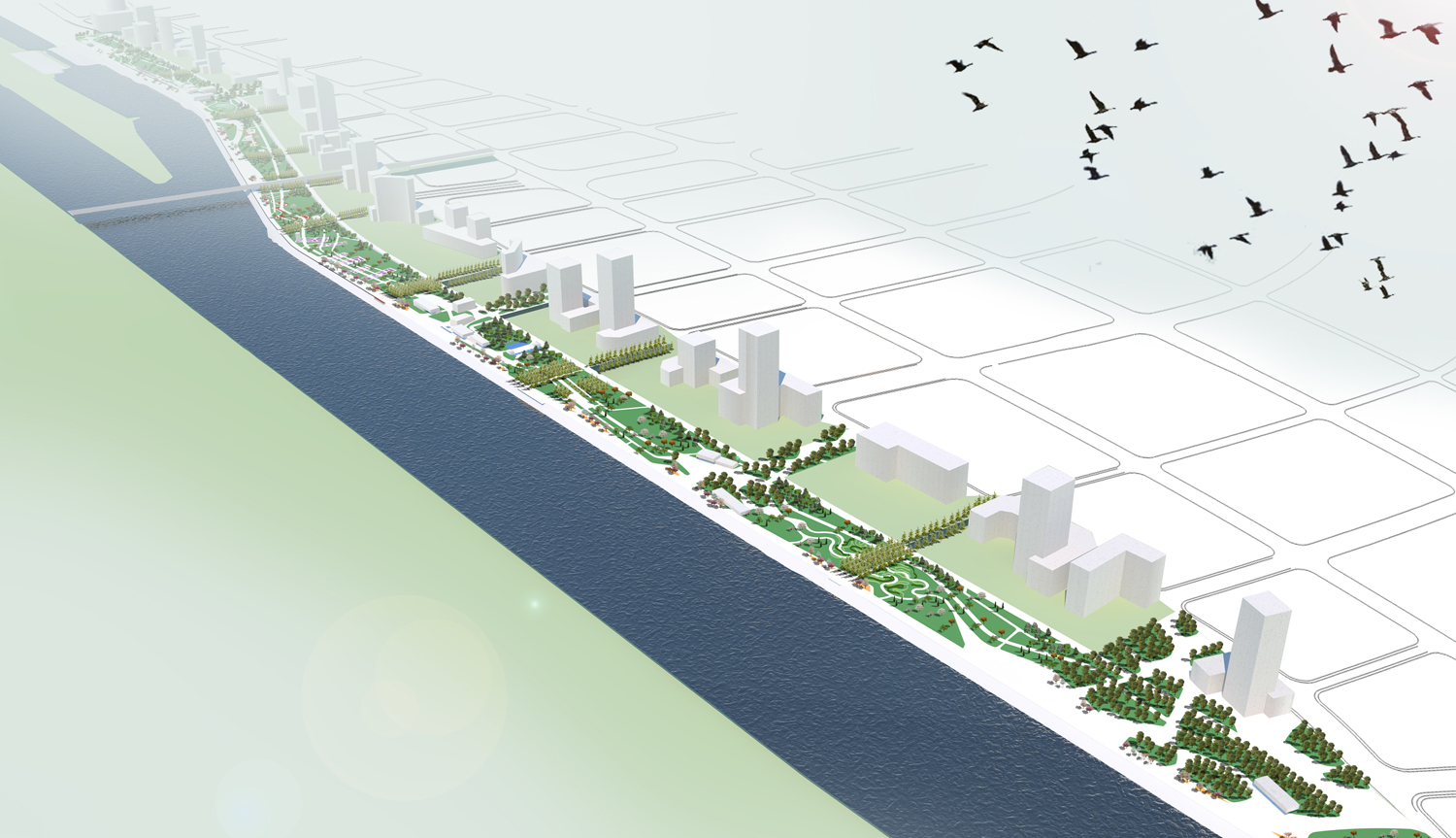 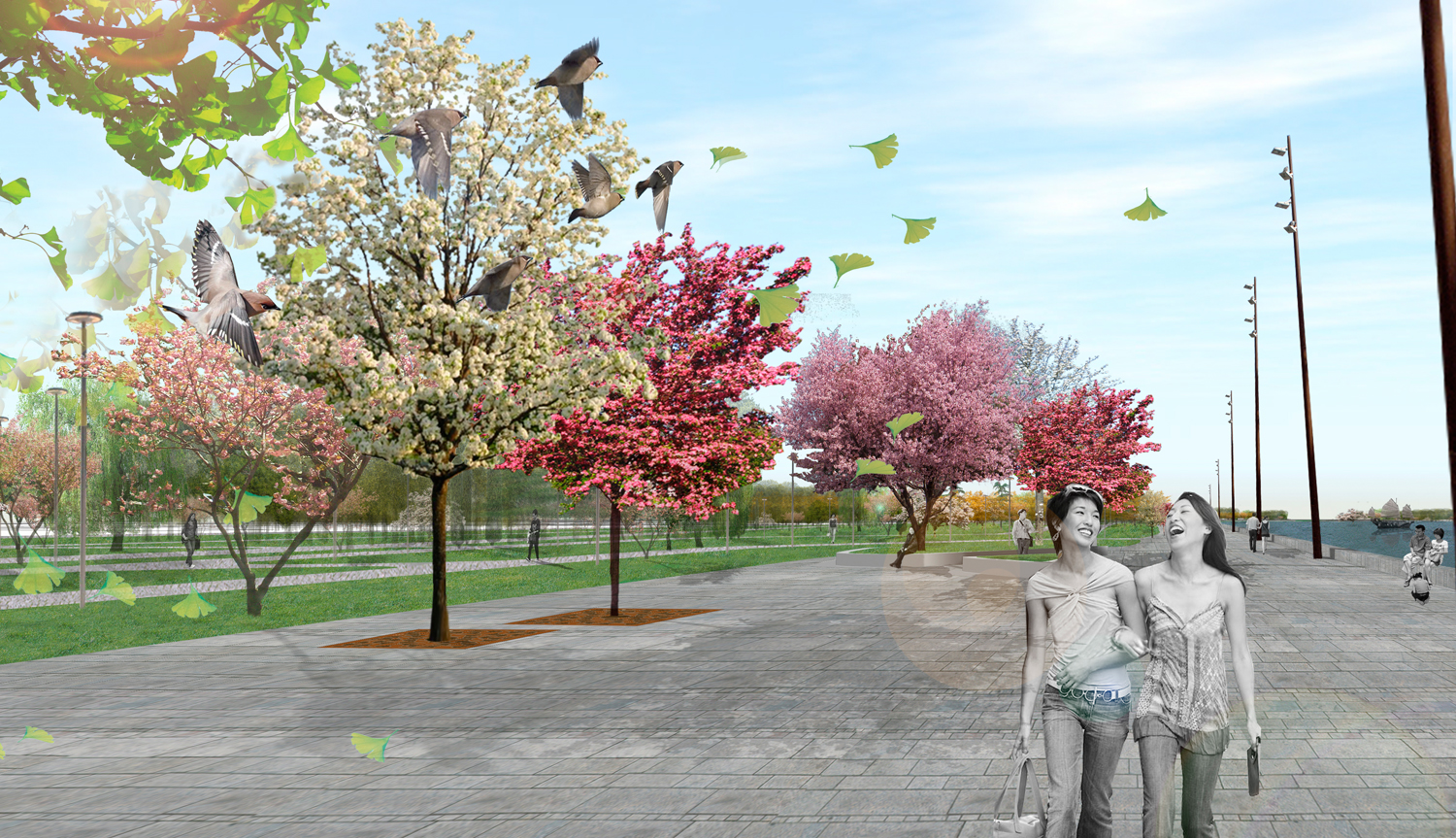 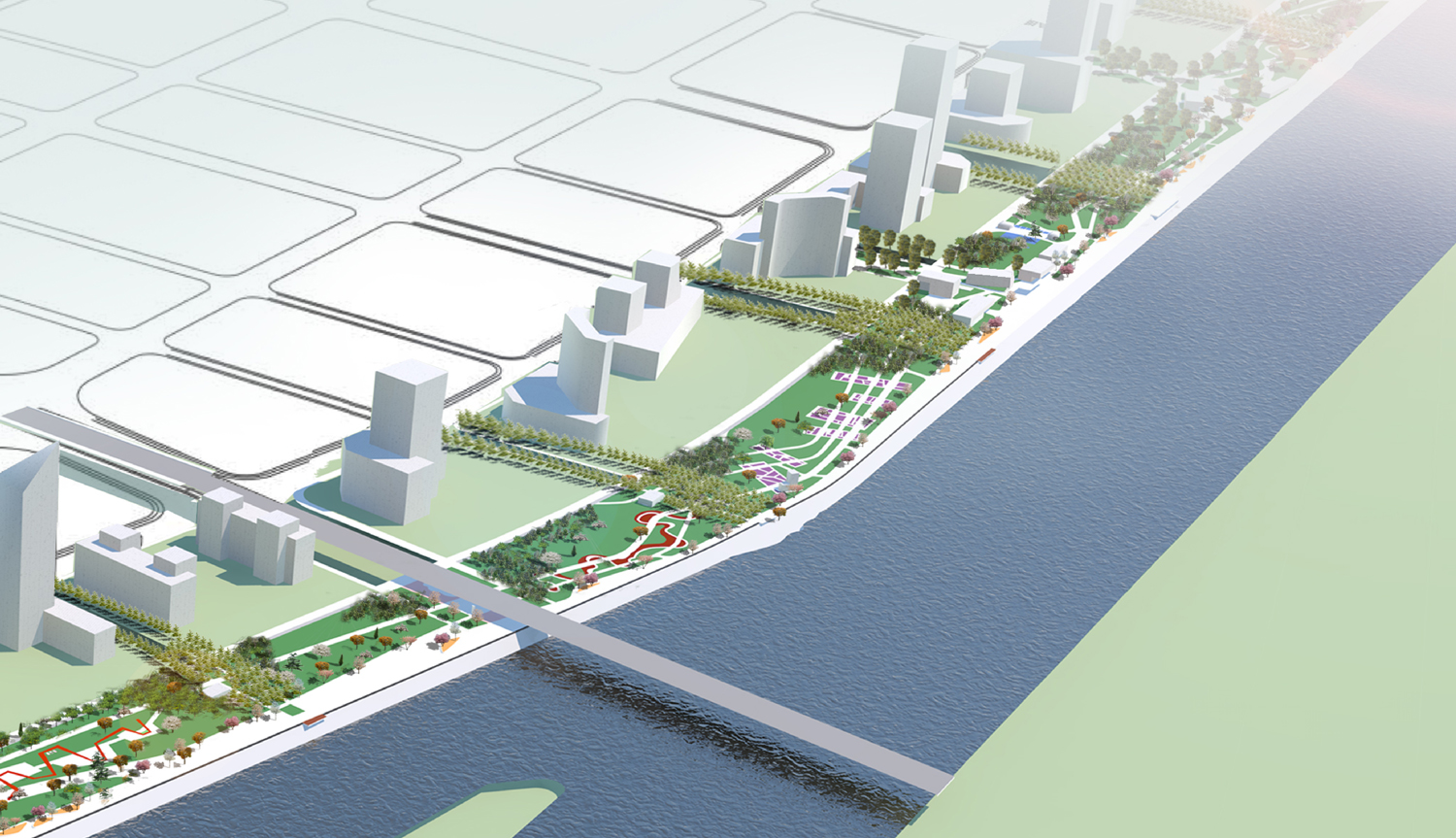 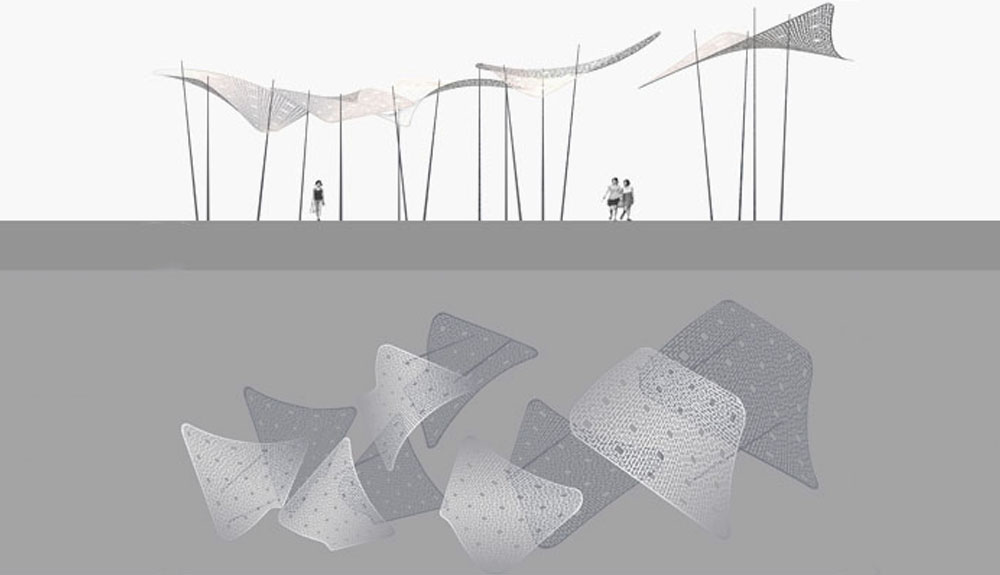 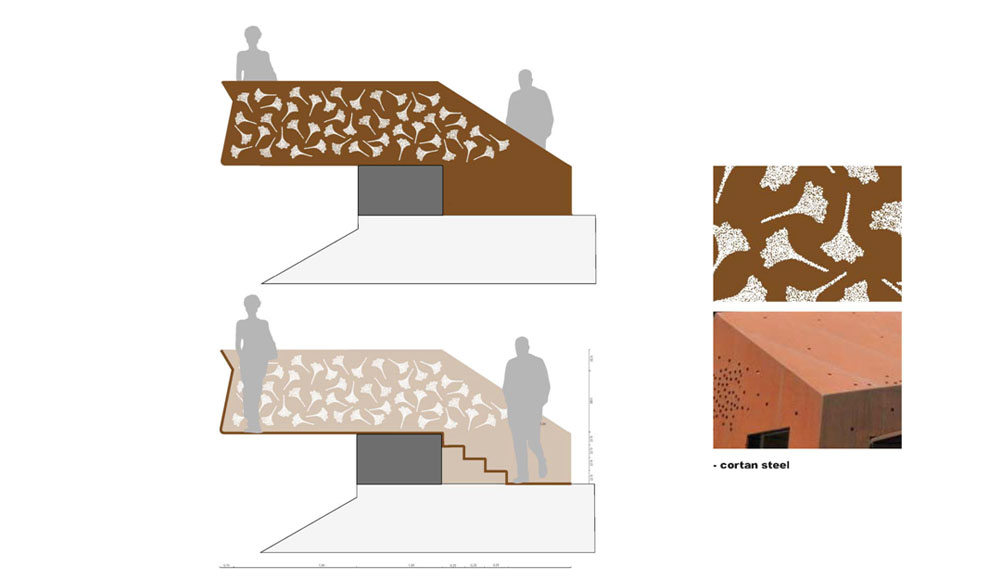 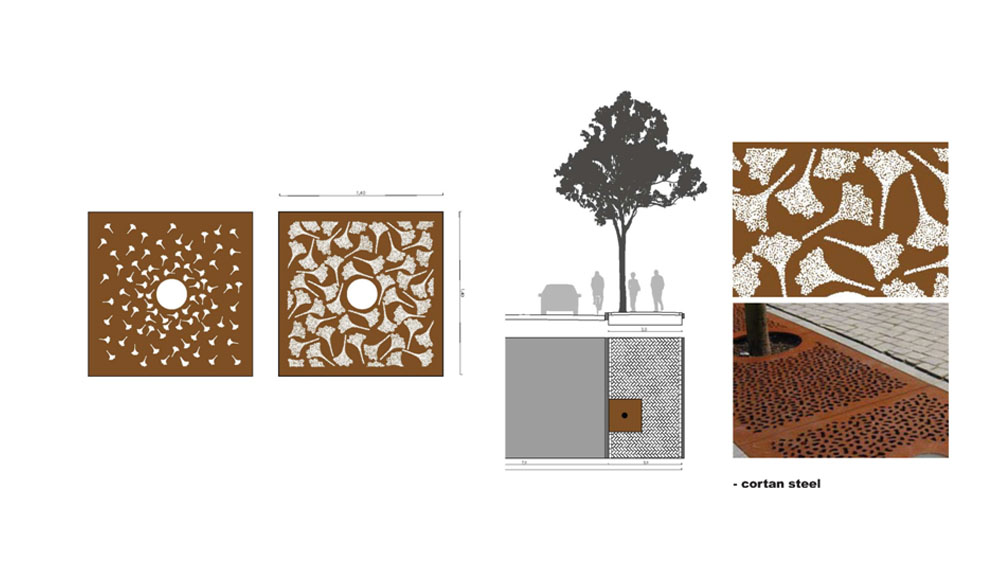 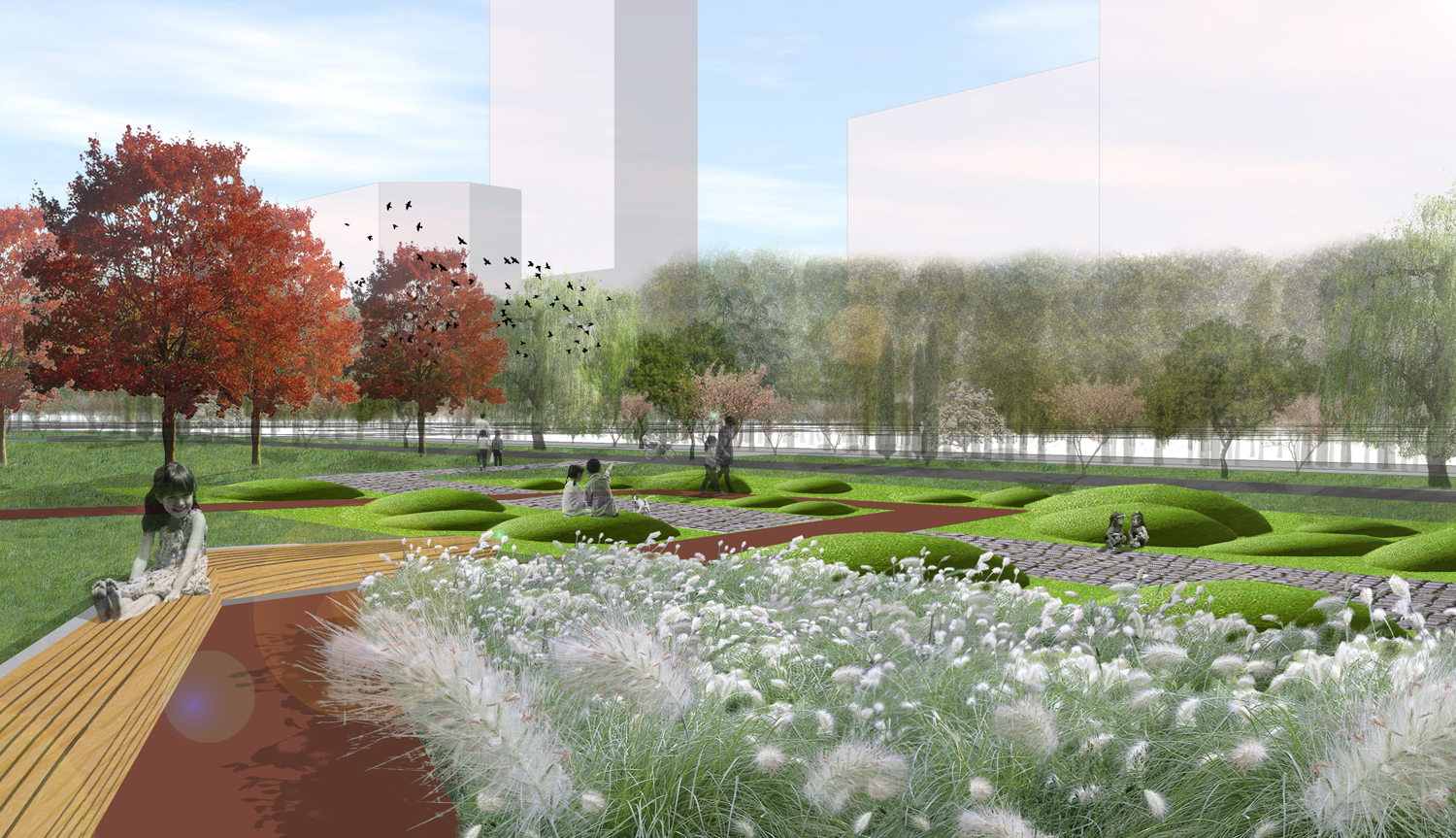 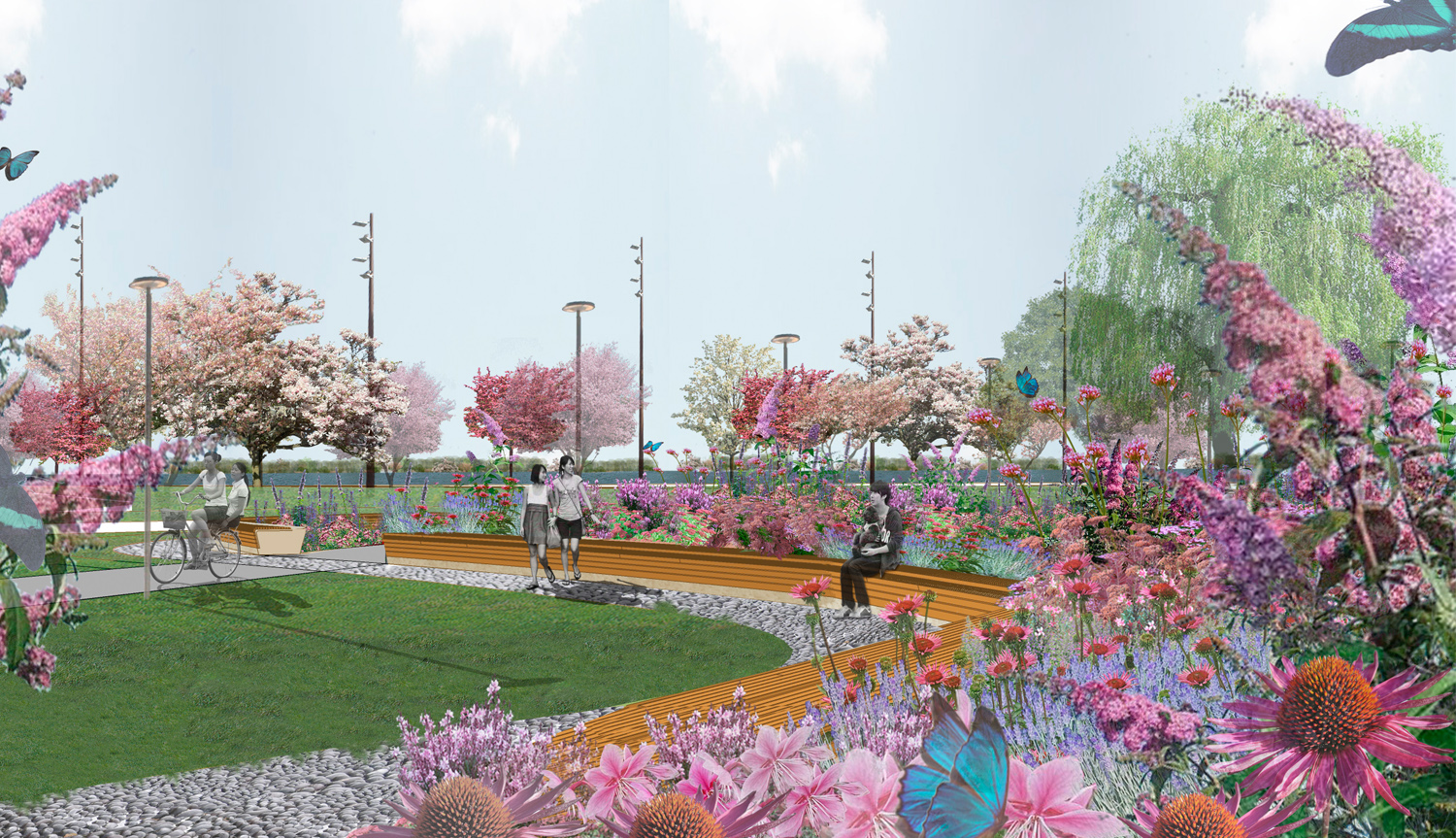 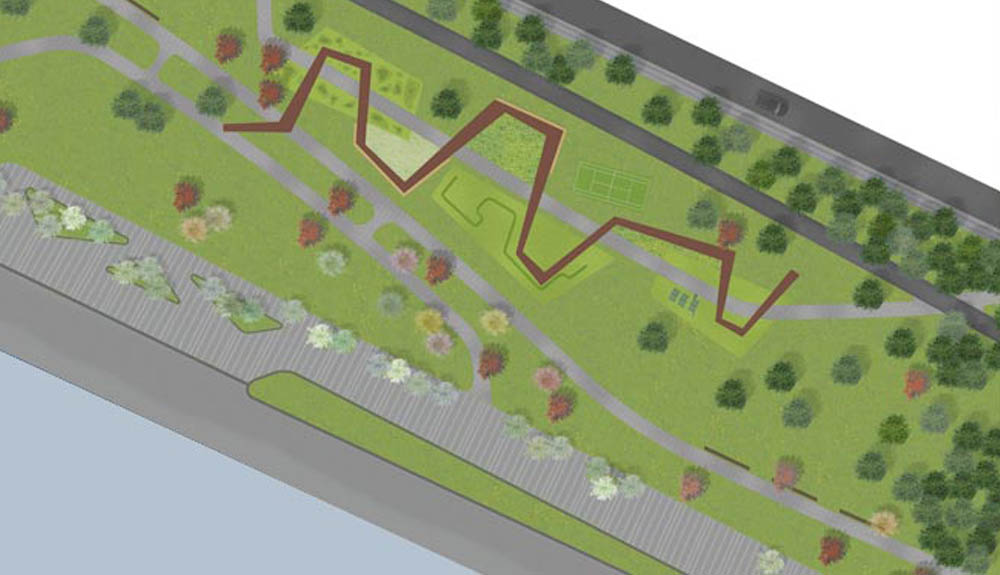 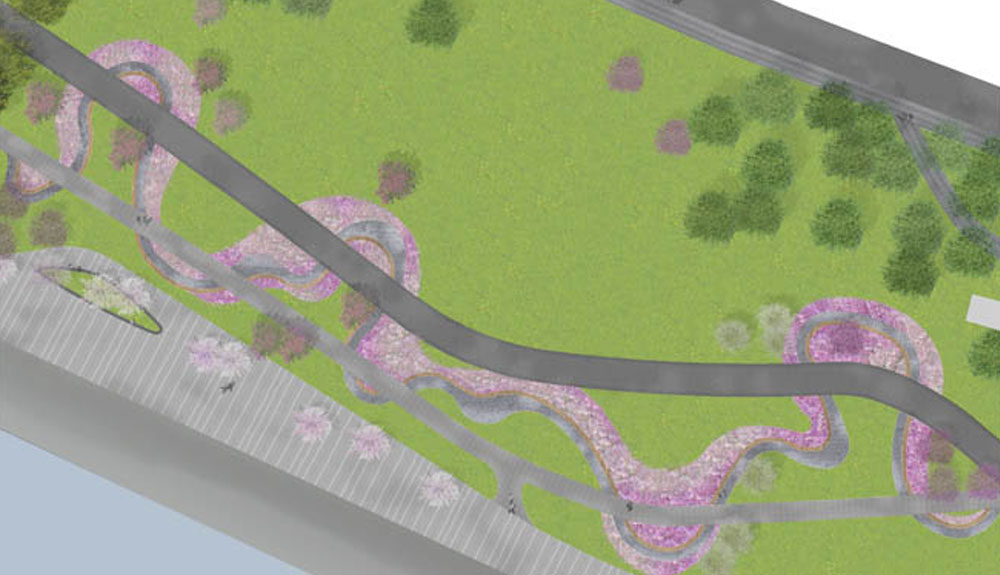 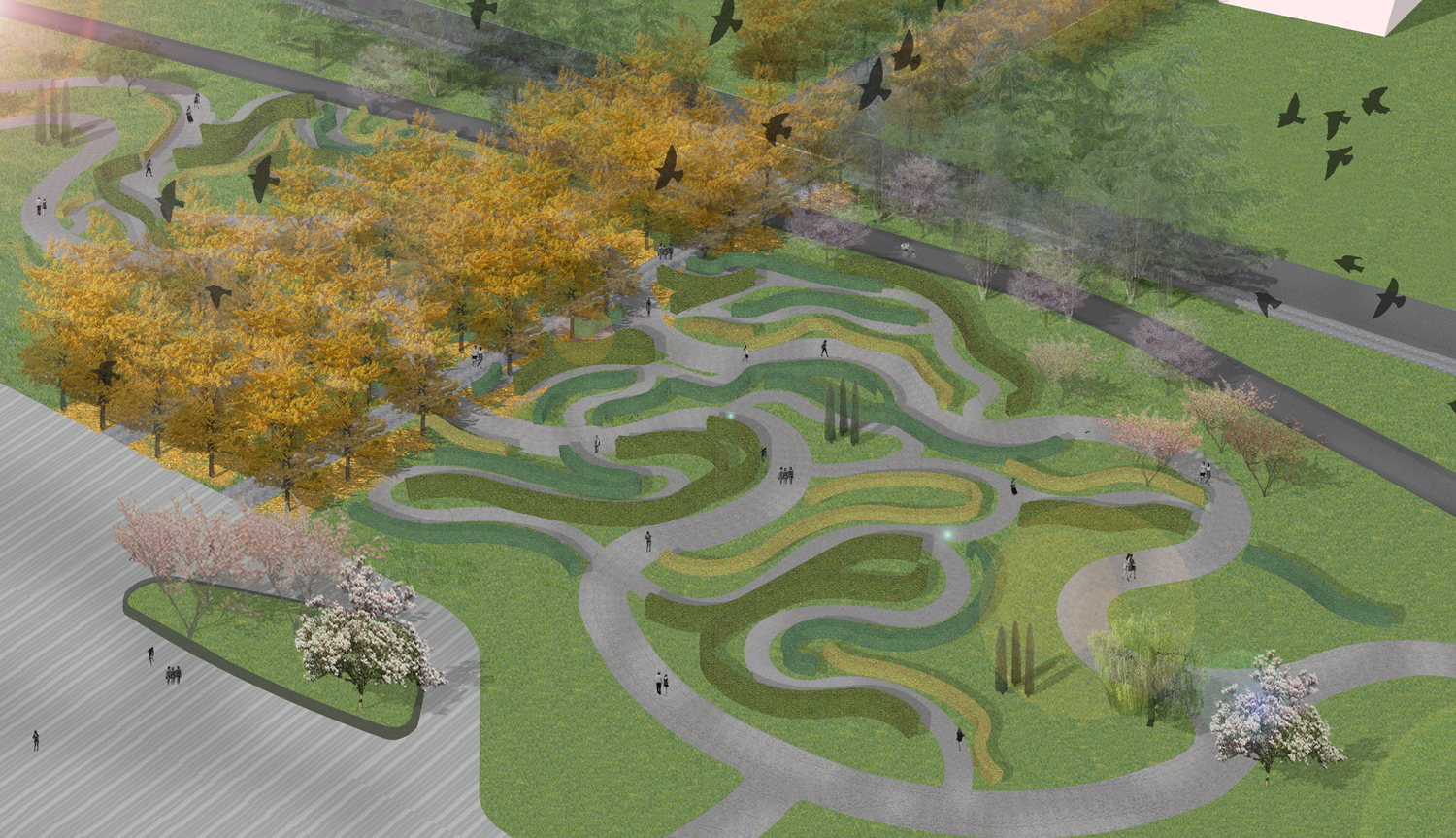 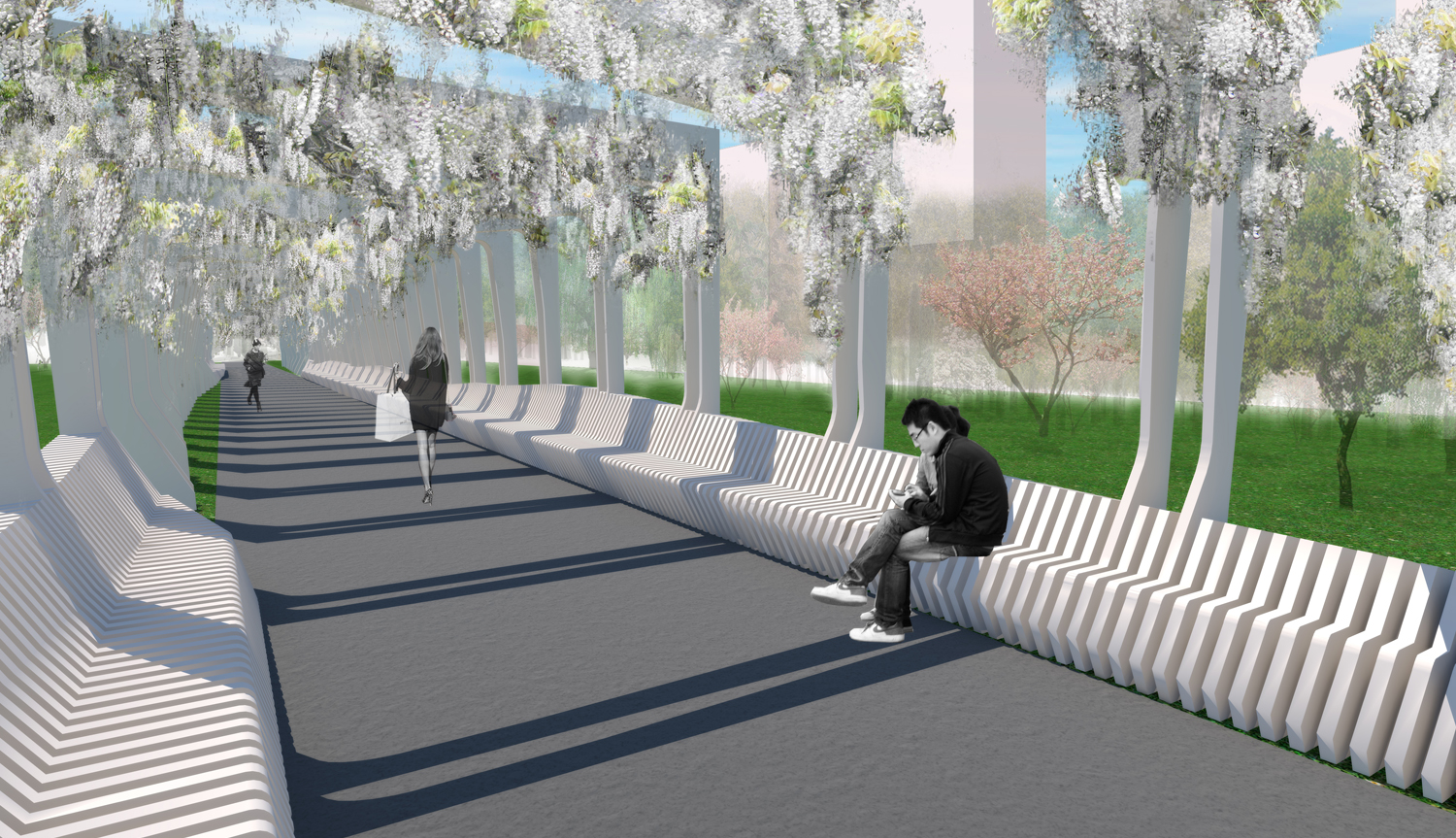 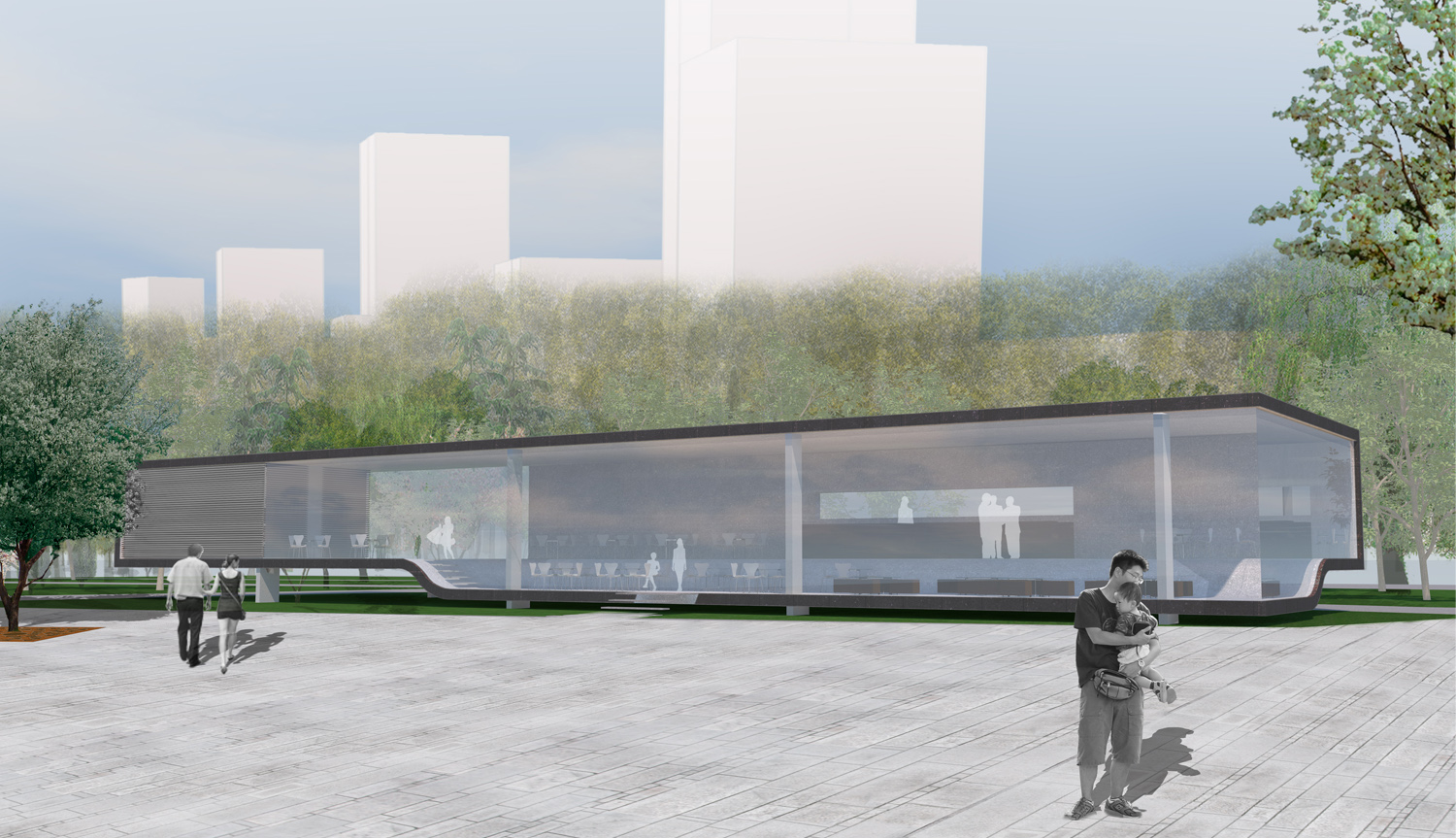 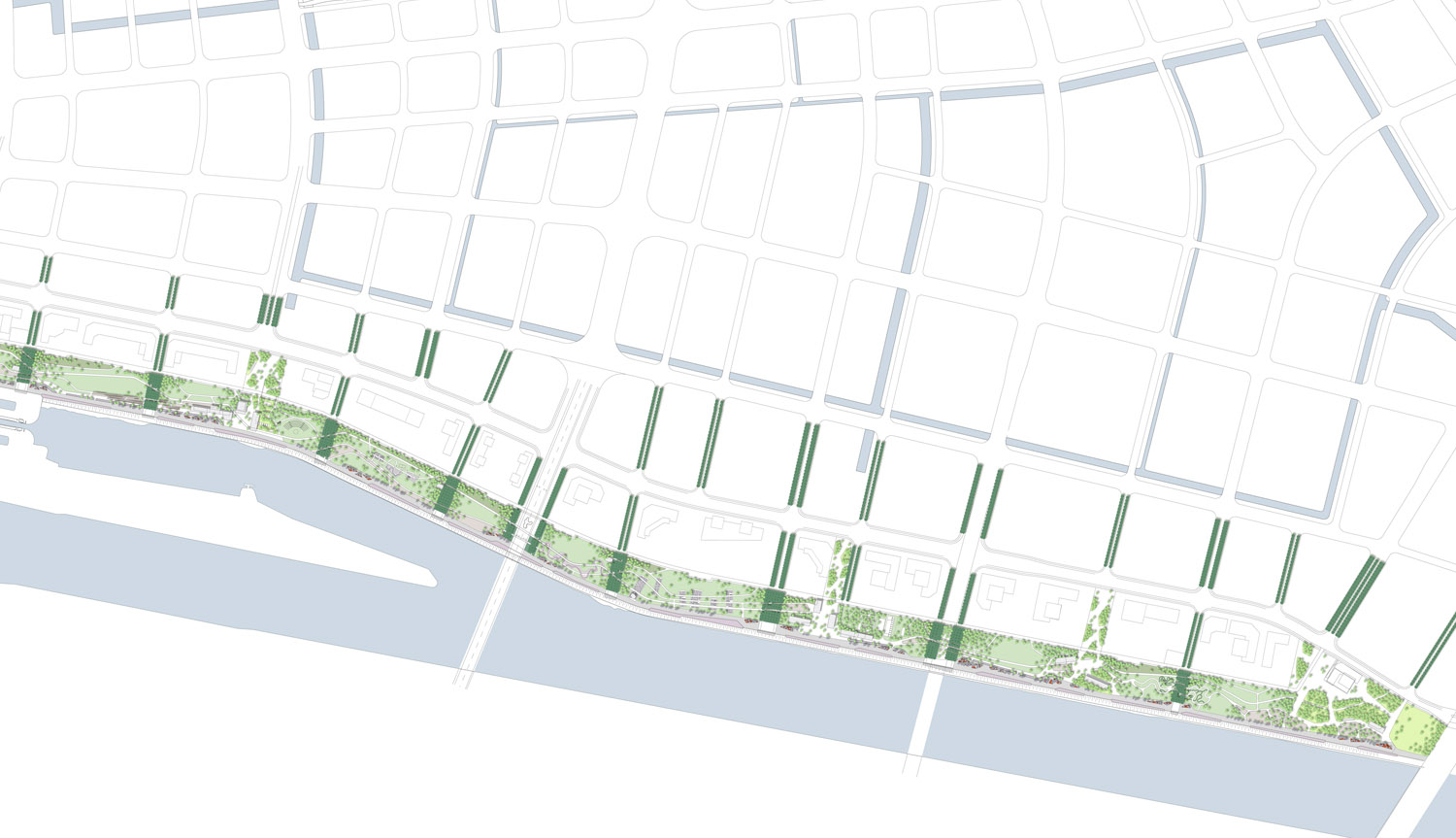