In 2014, the Dutch Embassy in Warsaw chose our firm to design the “Dutch Garden” in Lazienki Park. The Old Orangery in the beautiful Lazienki Park was built at the end of the 18th century to shelter exotic trees in the wintertime. It was also a place associated with culture and art. It is here that the court’s Royal Theatre as well as the largest sculpture collection were housed.

The name not only refers to the parterre garden, an example of 17th century garden history, but also to the first diplomatic visit by our new King Willem Alexander and Queen Maxima to Poland. They visited the park and the Orangery and the idea arose that The Netherlands should design and care for this garden. After all, the Dutch are famous for their garden design skills as well as their plant quality and assortment. The idea of the “Dutch Garden” soon took on a new meaning.

The design brief was that the layout needed to suite the garden history as well as include a strong new variety of vegetation. The design concept was presented in Warsaw in May by Niek Roozen and the layout and plant variety suggested was agreed. Our proposal, which follows the historical symmetry of the terrace, showcases a large variety of plants designed to create a contemporary look. The existing rhododendron borders along the south wall will be filled in with a colourful assortment of shrubs and perennials. The borders along the north wall, facing the sun, will bloom with a variety of roses and the two borders will meet along the east and west walls. The colourful parterres in the middle of the terrace will be full of flower bulbs, perennials and ornamental grasses.

We were lucky to find great Dutch sponsors who liked to promote their nurseries in Poland by presenting their best  for this plantation, consisting of 9 tall shrubs, 463 roses and evergreens, around 4000 perennials and ornamental grasses and almost 50,000 bulbs.

In October we worked together with a great plant team from Lazienki Park , planting all this material in the lowered garden consisting of side borders and symmetrical beds. In spring we will return to finish this parterre garden with the planting  of the summer flowering bulbs.

Client
Embassy of the kingdom of the Netherlands – Warsaw 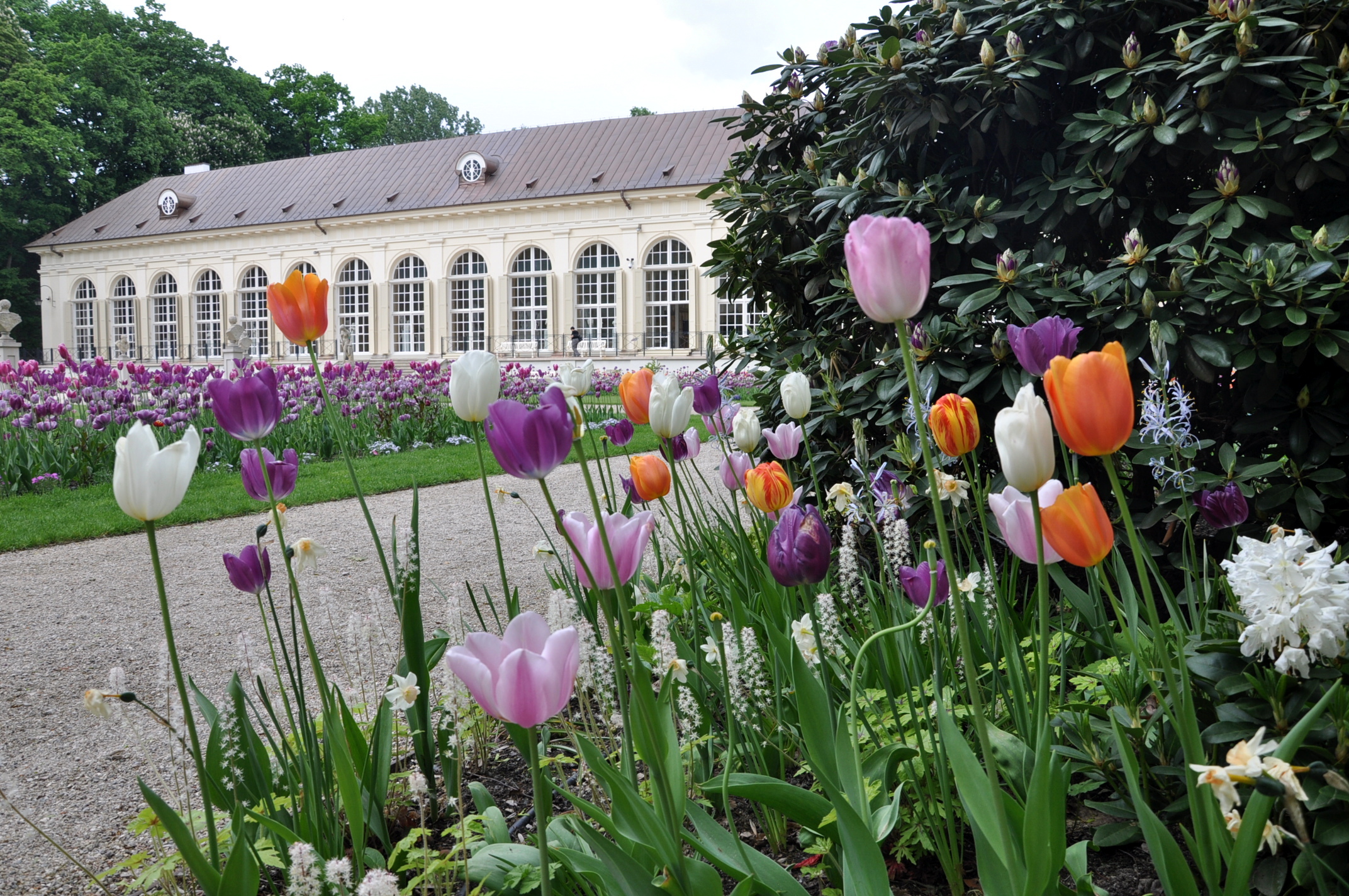 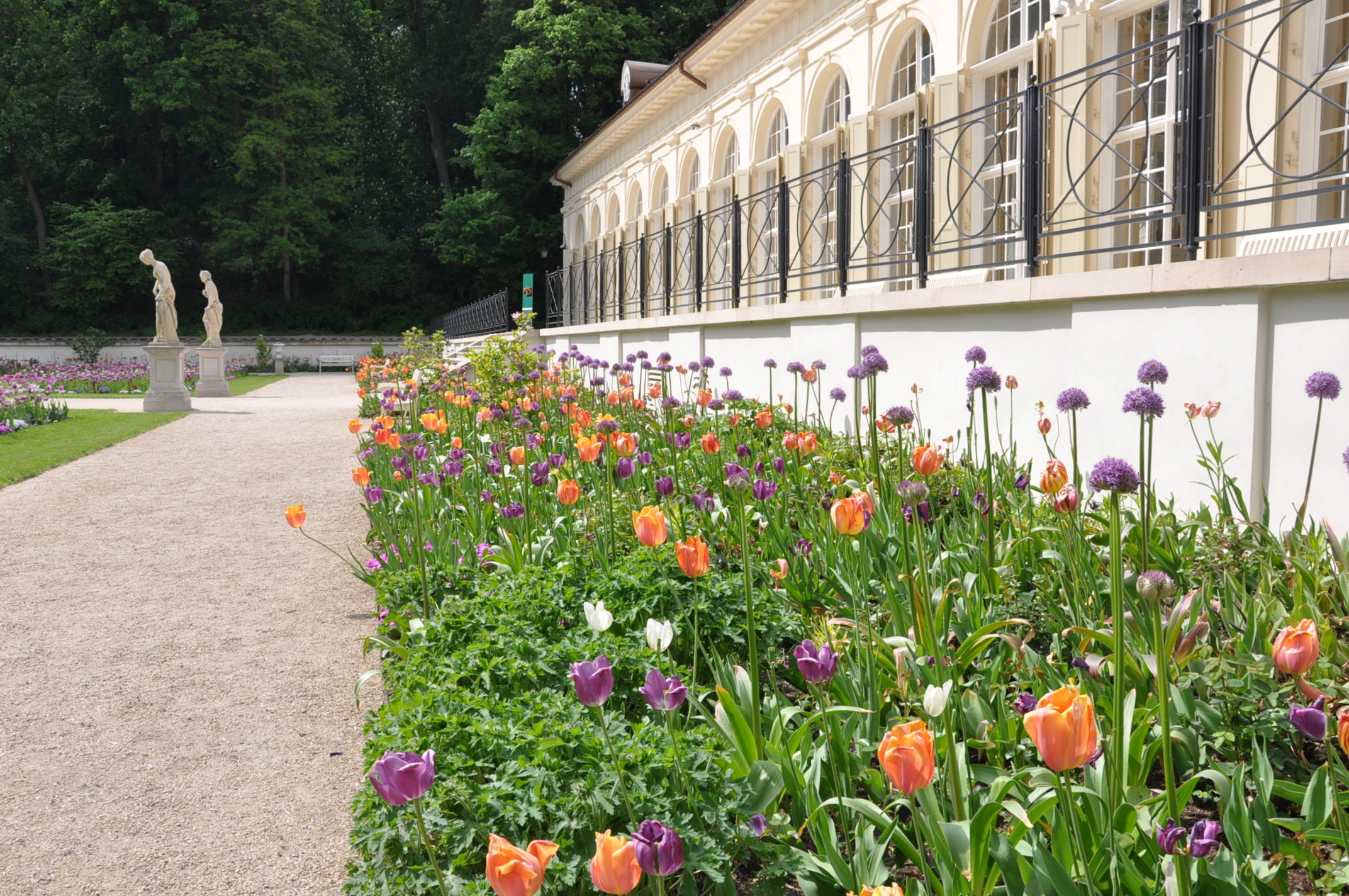 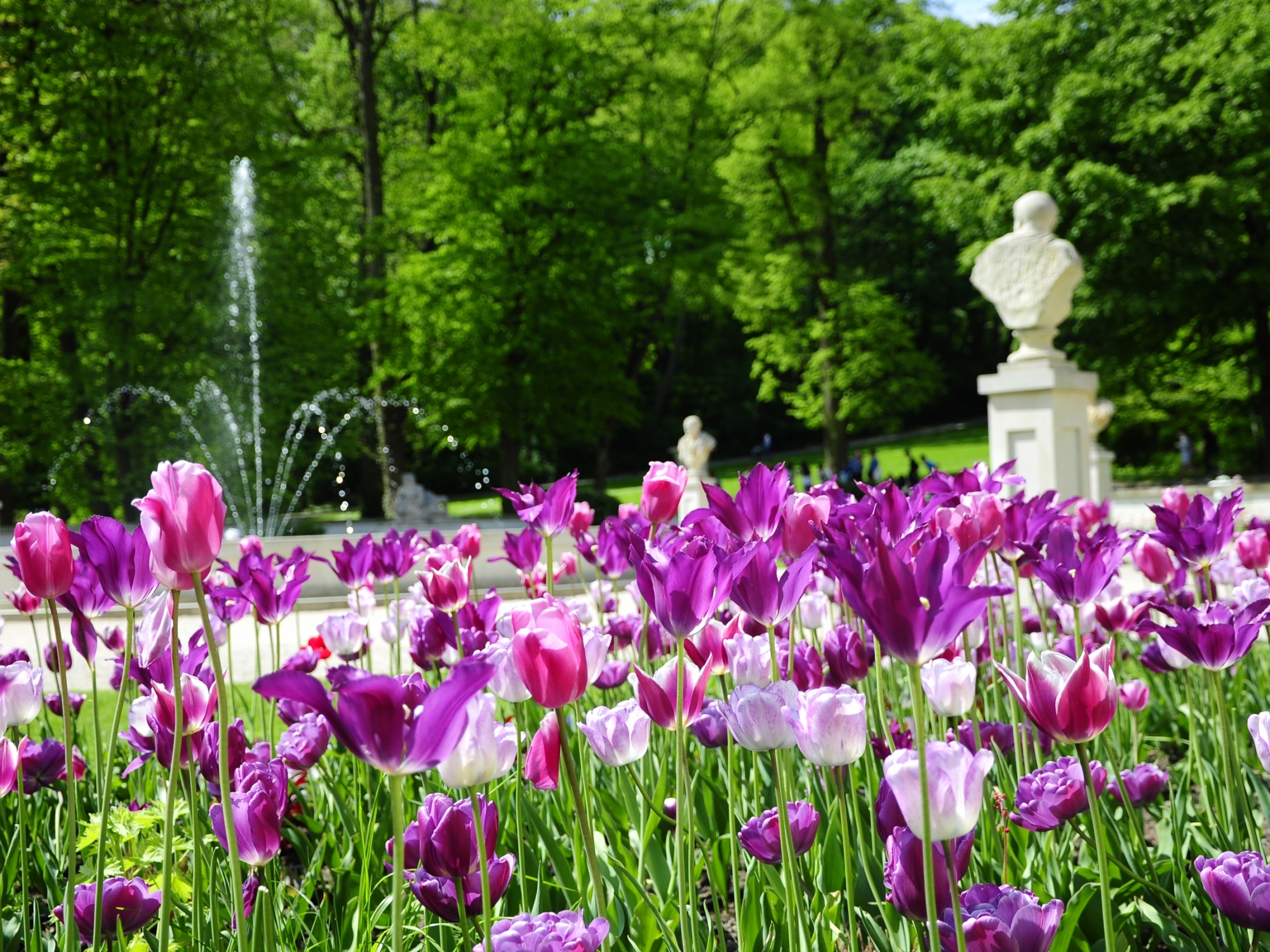 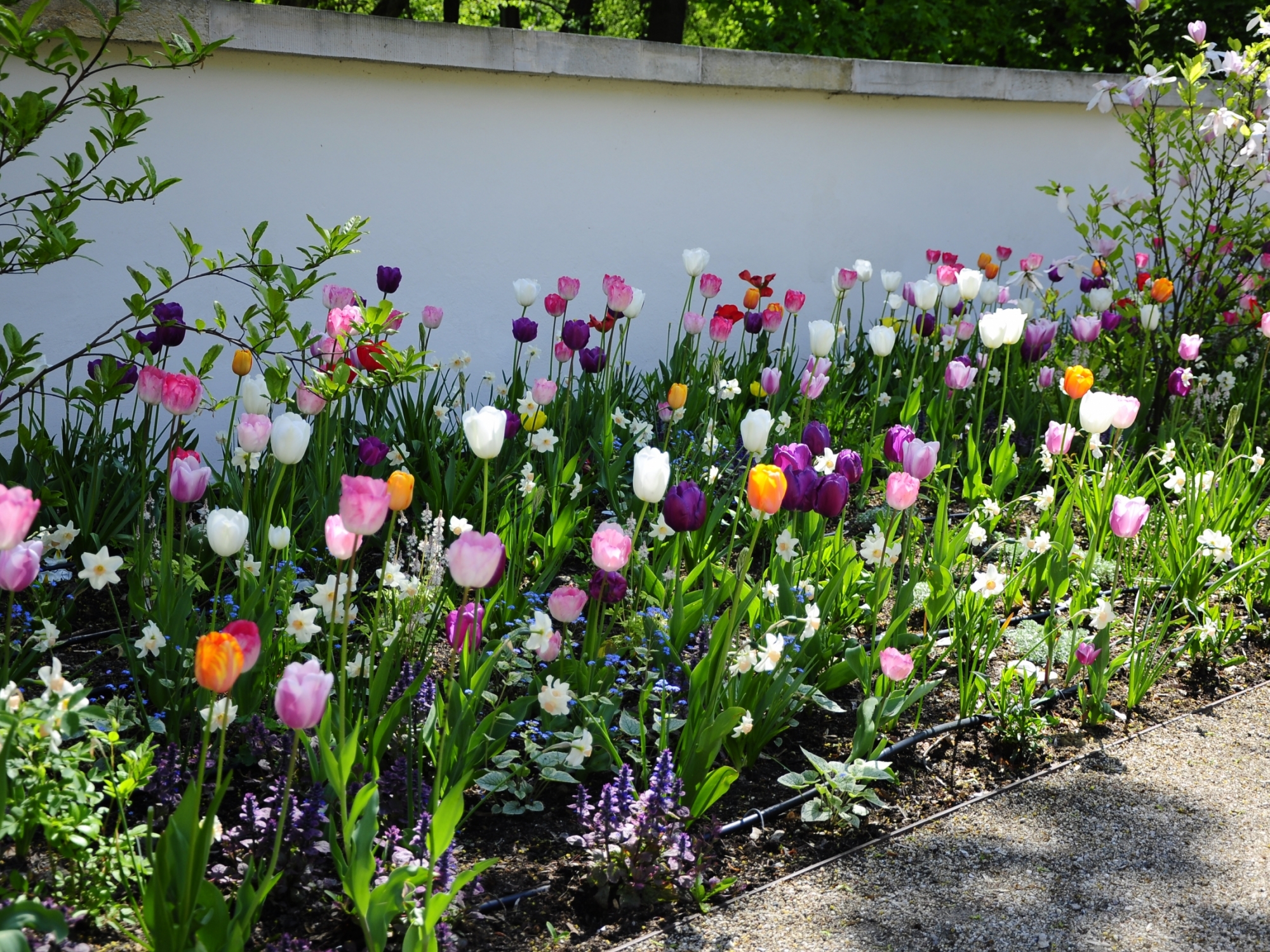 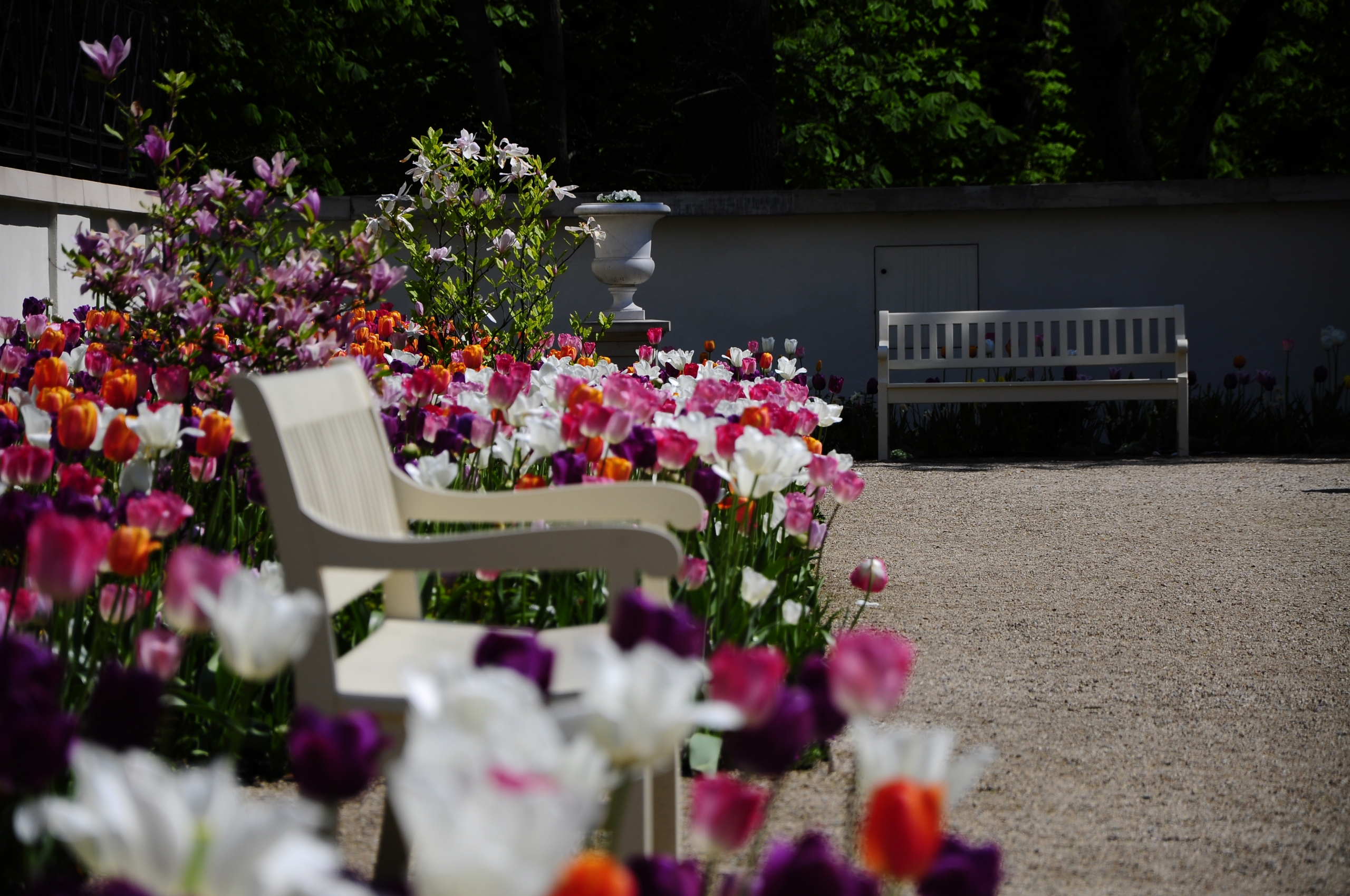 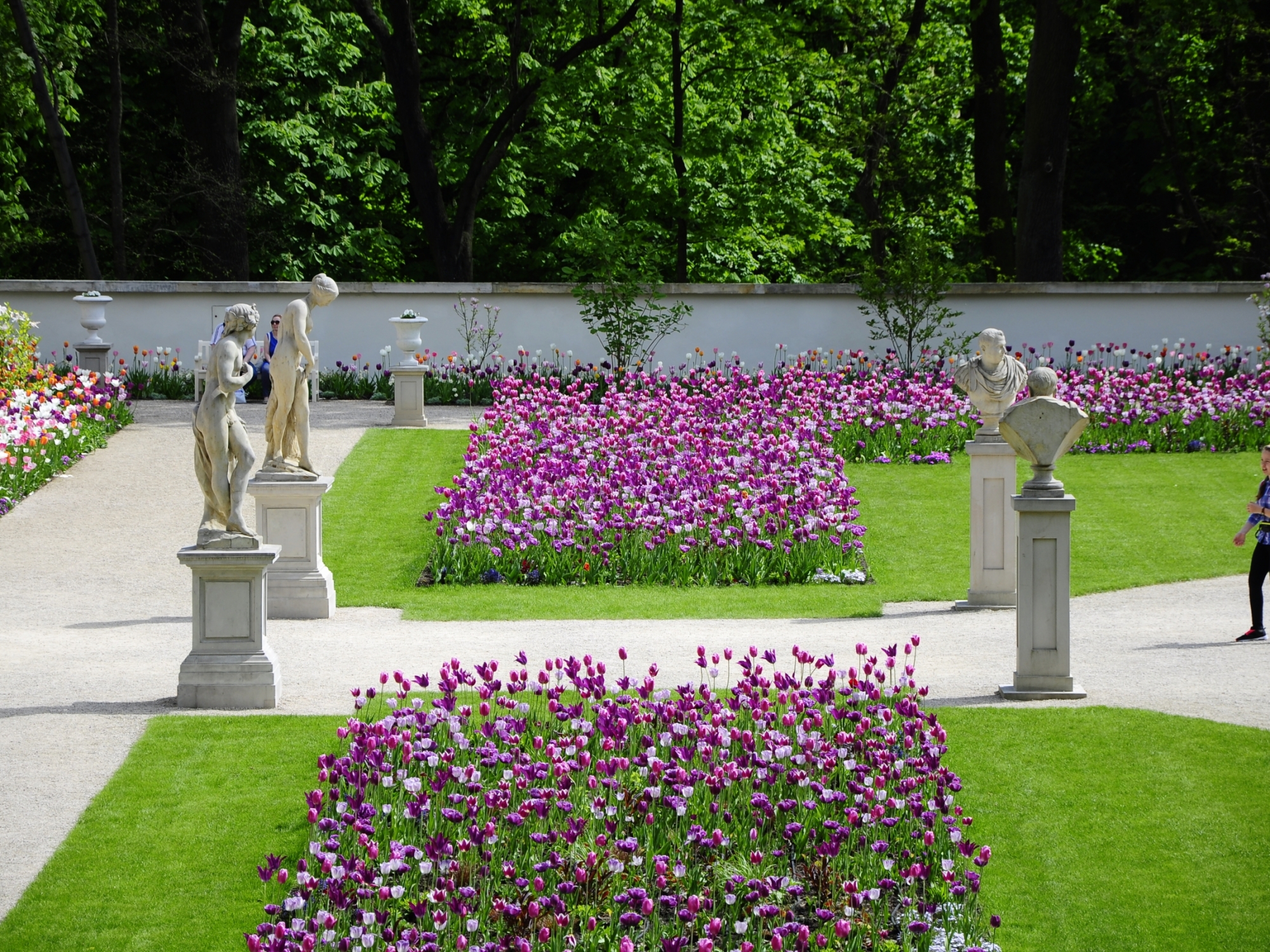 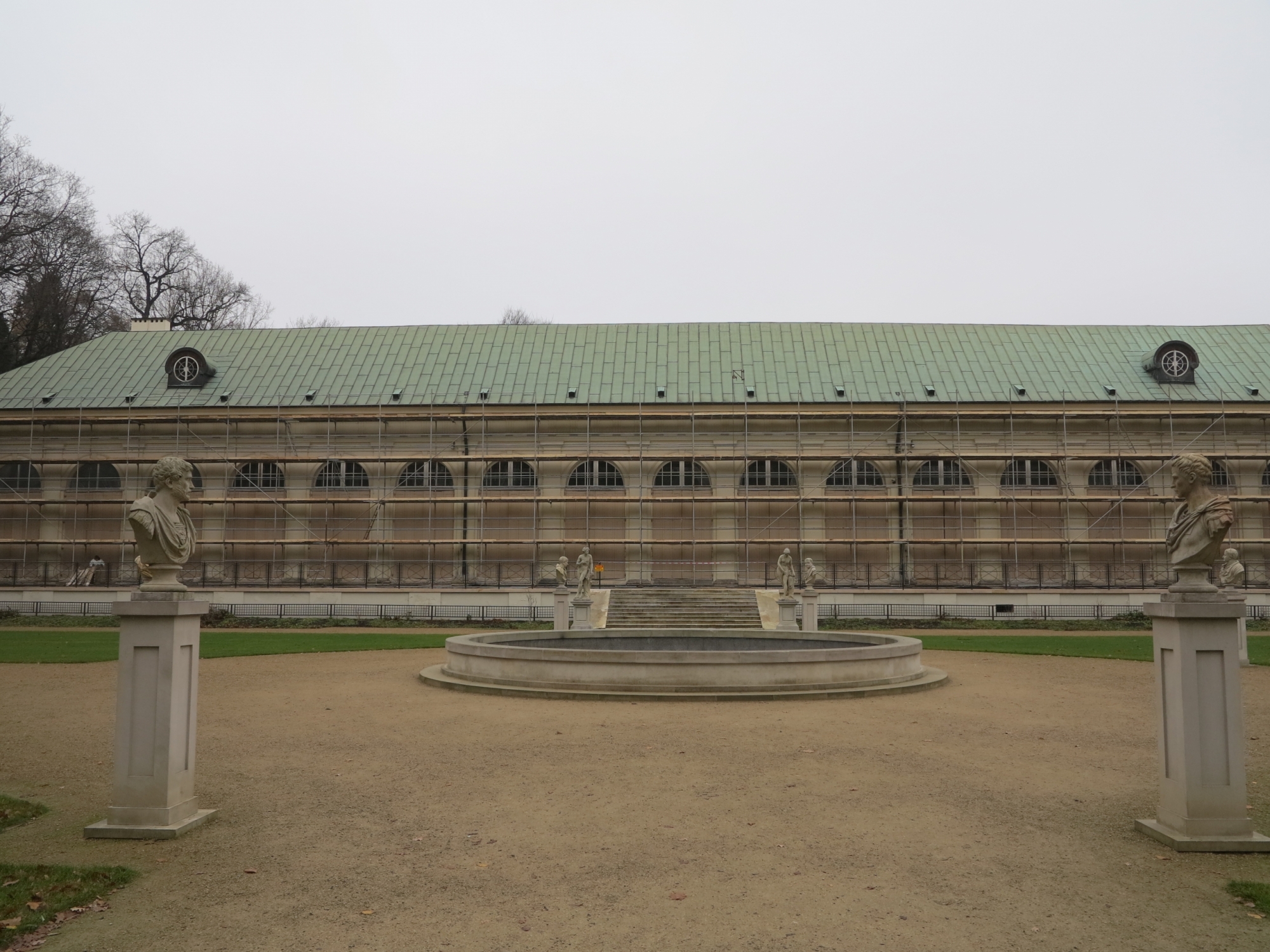 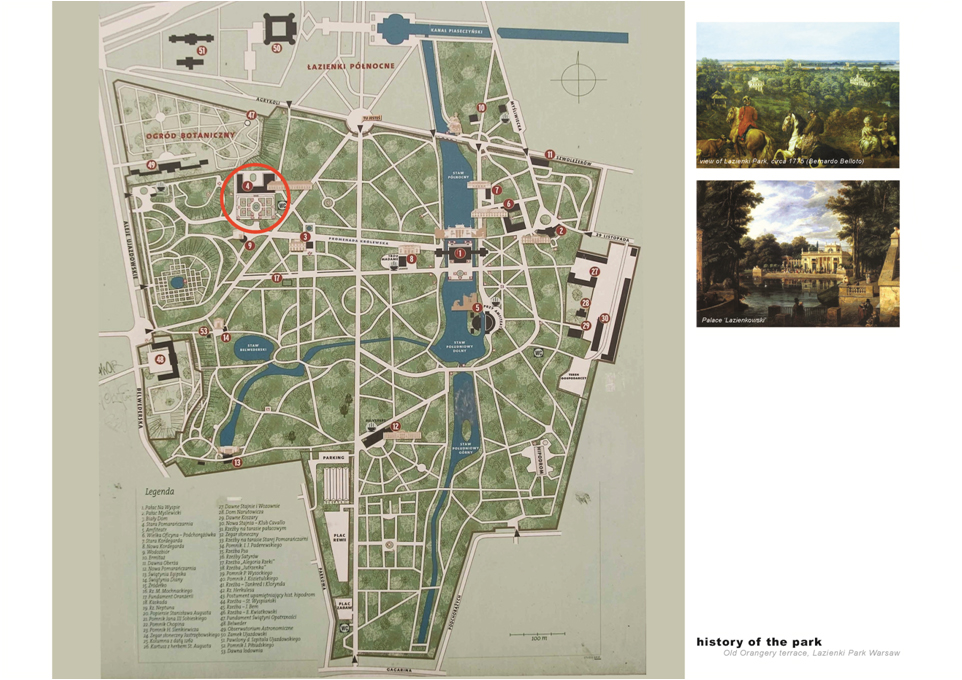 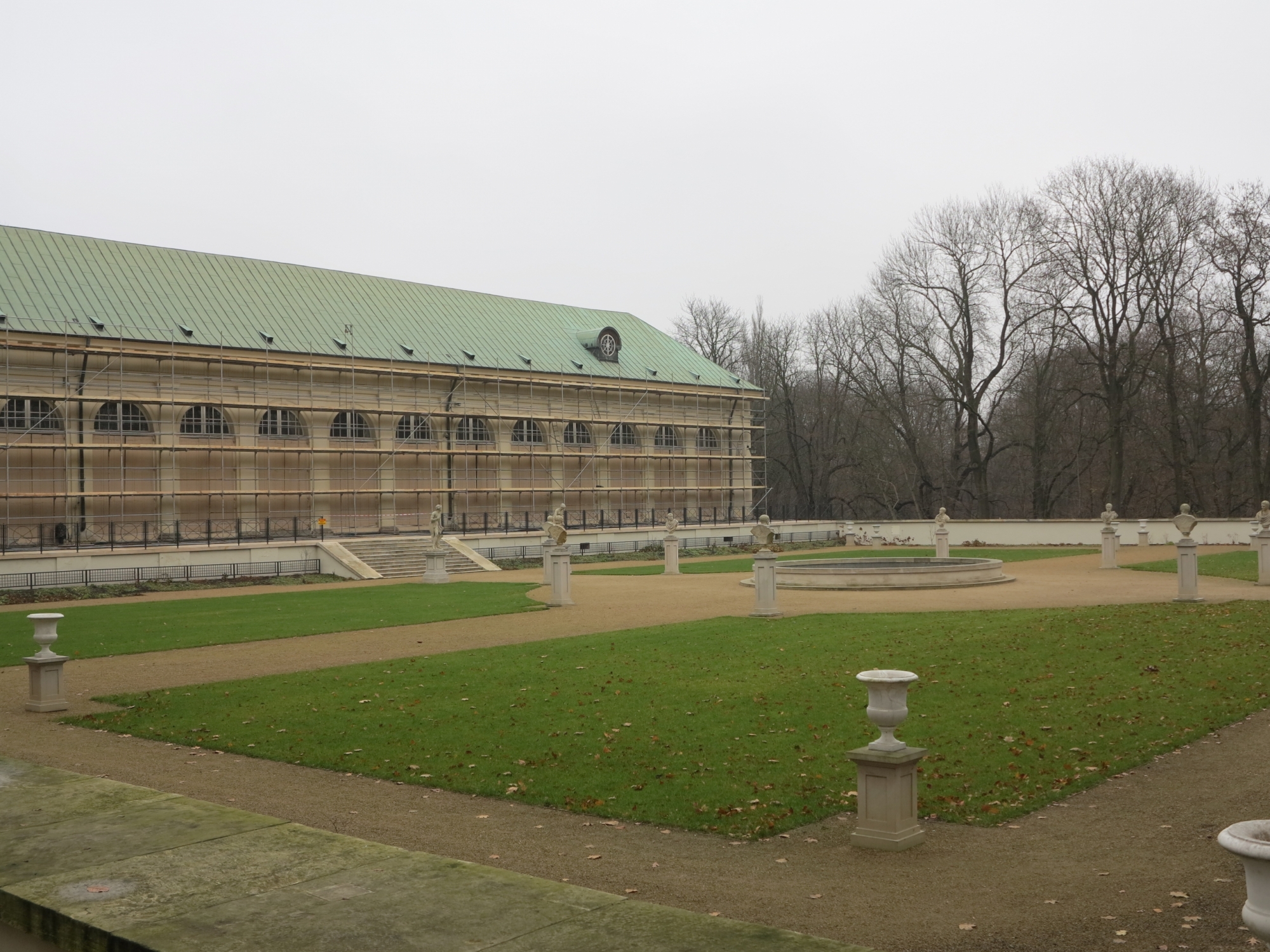 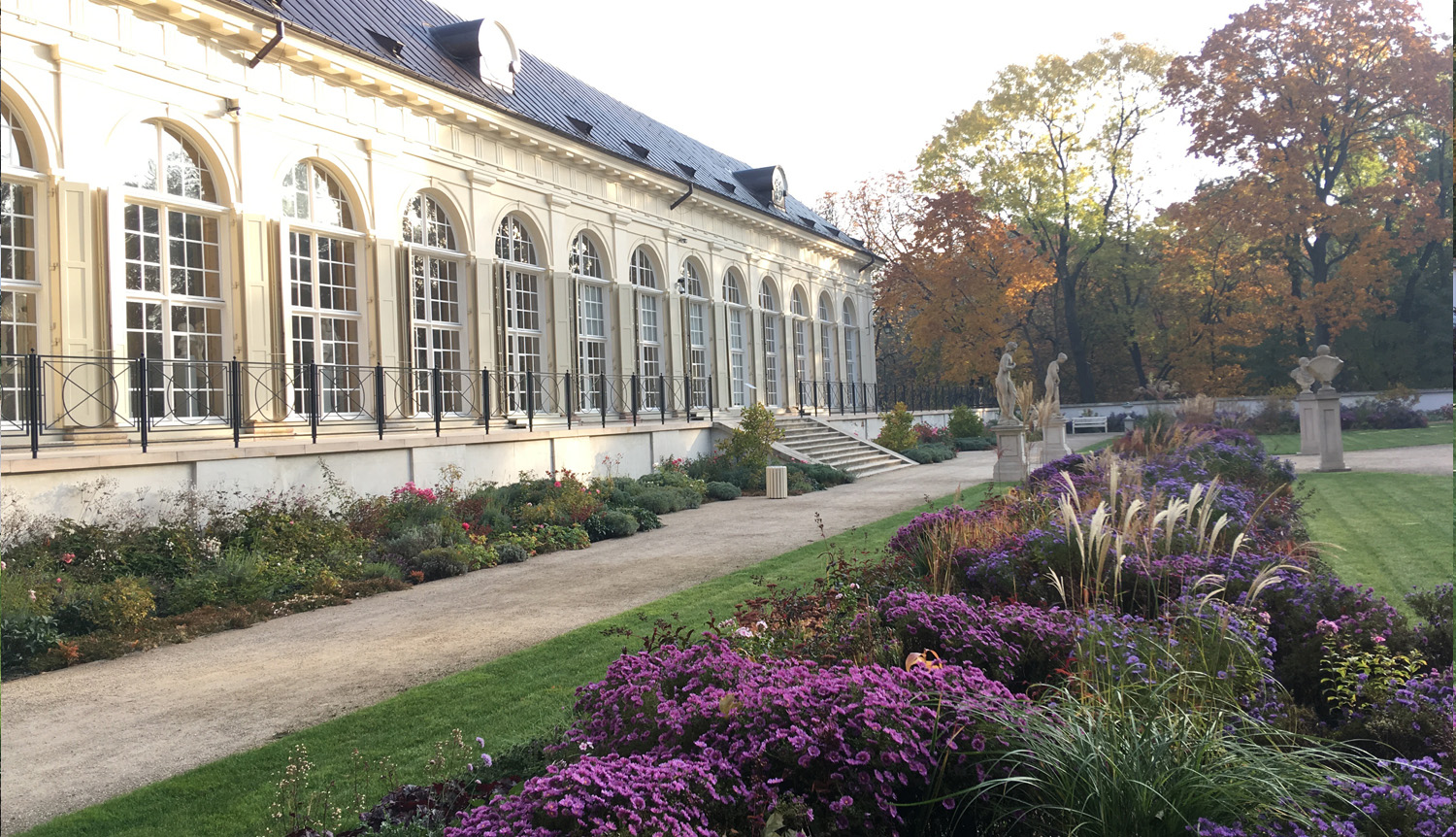 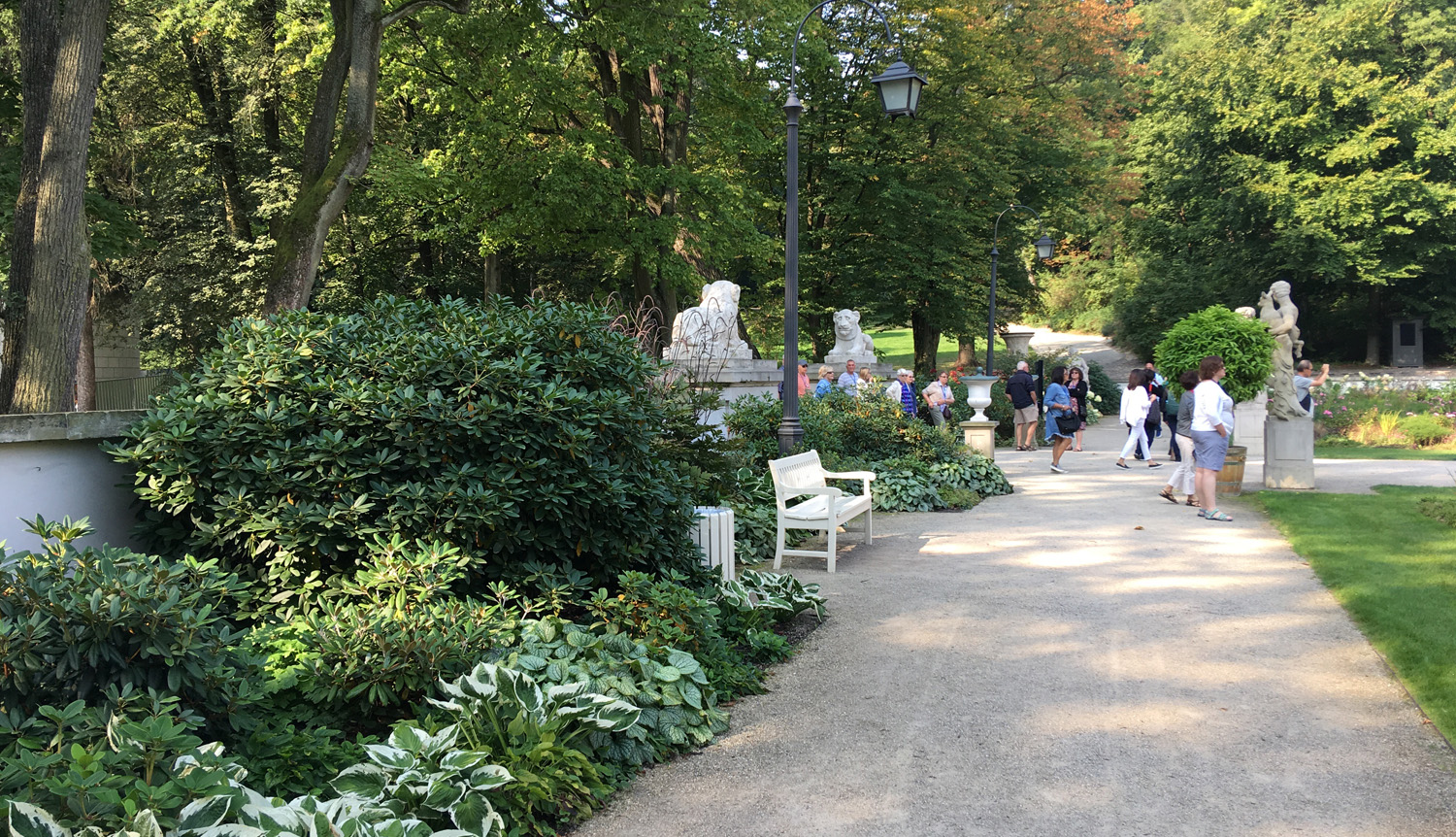 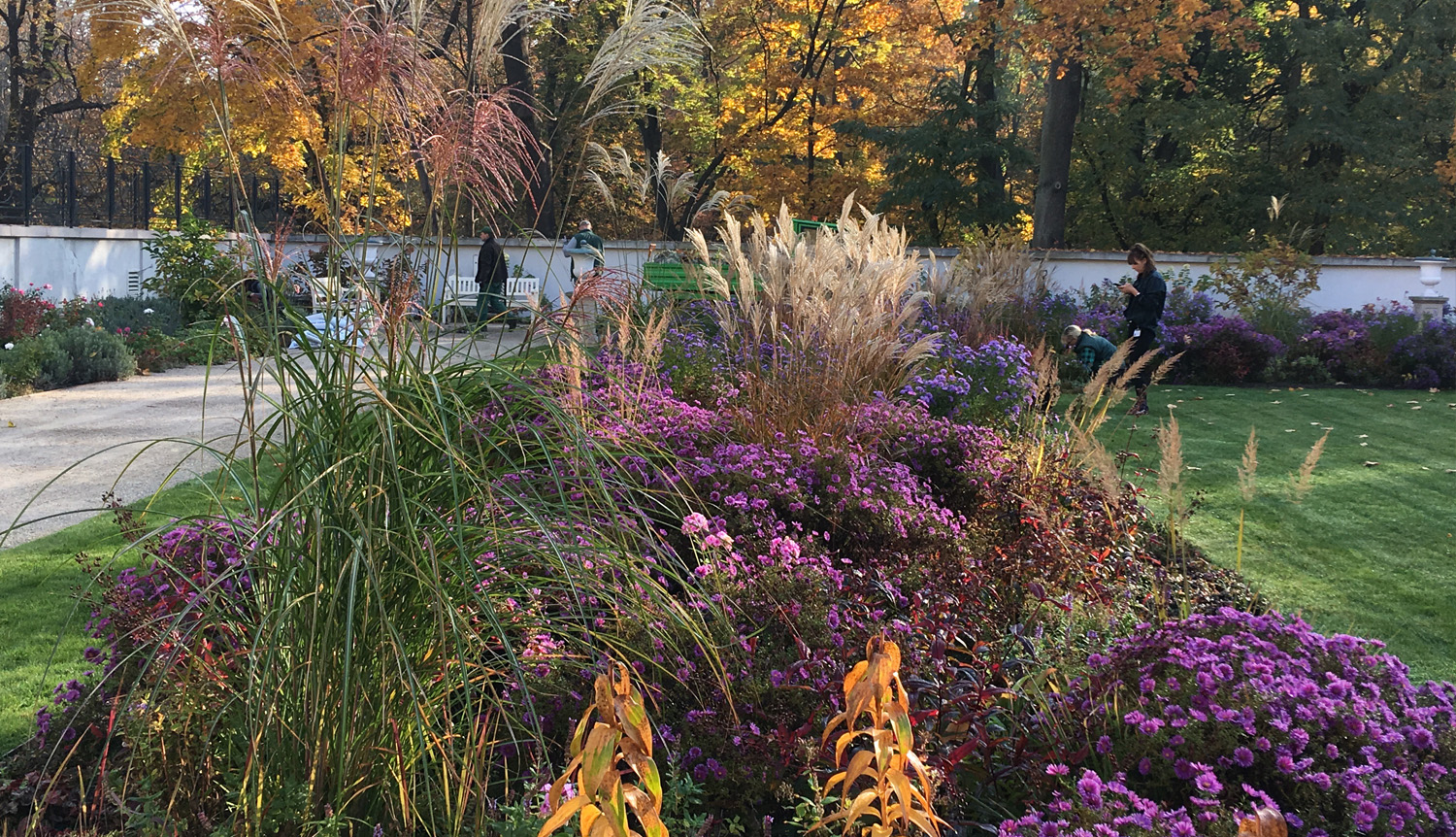 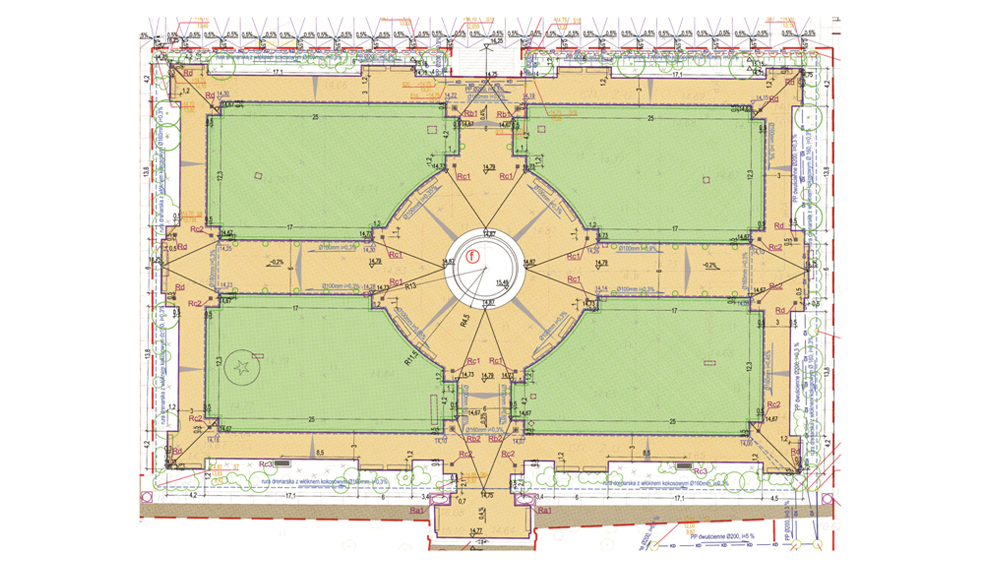 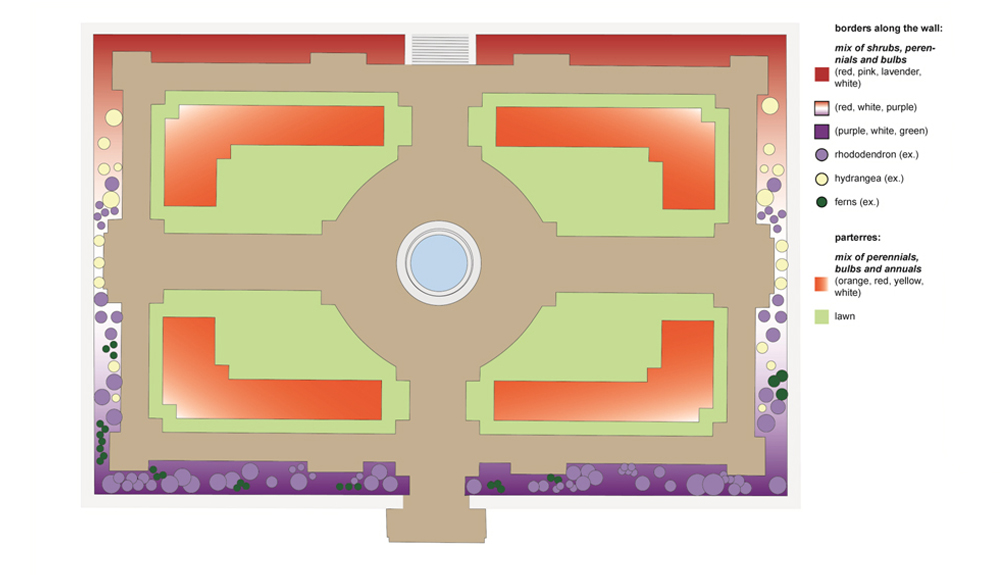