The Emmen Zoo was relocated just outside the centre. The proposal for the new entrance to the building combined a new theatre, transforming the space into a unique urban square. The square serves as a functional and aesthetic public space for existing surrounding buildings, such as the city hall and shops, and thus fulfills an important central role within the city of Emmen. The relocation of the road and parking facilities below ground level provided the opportunity for the design of a 2.3 hectare public space.

The approach to the design was to create an event space in front of the new building entrance/ theatre, increase vegetation and implement a water element. The residents of Emmen expressed the requirement to have the large area divided into multiple smaller spaces. These spaces were designed to provide alternative functional elements such as a square for people to relax as well as move around and play, festivities but also quietness, romance but also experience. The design of the new square needed to be lively and green as well as the beating heart of the city.

Inspiration for the design of the square came from the butterfly; a symbol of the city of Emmen, biodiversity and the connection between the city and the zoo. The pattern on the wing of the butterfly inspired the creation of a gracious paving design which forms a calm but dynamic base for the entire square, from façade to façade. The silhouette of an inner square was added to create functional spaces along the buildings and provide a more intimate atmosphere in the middle. Near the building entrance, the upper left side of the square borders a magnificent old forest, which is preserved and defined by the boundary of the square and a sightline along the forest into the landscape beyond. As a reference to the landscape connection, the inner square is elevated to a rich planting area filled with butterfly-flowers and trees, while in the other corner opposite the new entrance building the inner square is a sunken water element.

The edges of both the elevated and sunken elements were accentuated through the use of natural stone borders of different heights, this formed versatile seating and play elements. By positioning the planting and water elements in the inner square a natural passage was created from the centre of Emmen to the building entrance and offered the square two elements with different landscape characters and human scales. A new information centre was positioned along this route. All materials used; pavement, grass, flowers and water, followed the butterfly pattern which bound all elements into one square. The pavement exists of marbled natural stone of different sizes in a directionless bond. The color varies from sandy to red-brown as a reference to the sandy soils whilst the colour contrast between the paving emphasizes the butterfly pattern. Plant species such as evergreen pine trees have been selected to reflect the surrounding character of Emmen, whilst blossom trees offer a spectacle in spring and visual diversity to the pine trees.

The water element with its fountains offers an attractive place for people to relax and play in summer whilst providing an open space for theatre and events. In winter the opportunity exists to use this area for ice skating. The water level varies through a slightly sloped floor; this creates a different image after a rain shower. The planting area provides intimate smaller spaces and seating areas enclosed by planting. These spaces can be filled with, for example a playground, skating bowl, field for sunbathing or to reflect the needs and wishes of residents and visitors. During spring a long pergola filled with evergreen honeysuckle and wisteria along the shop fronts offer a lovely spectacle. 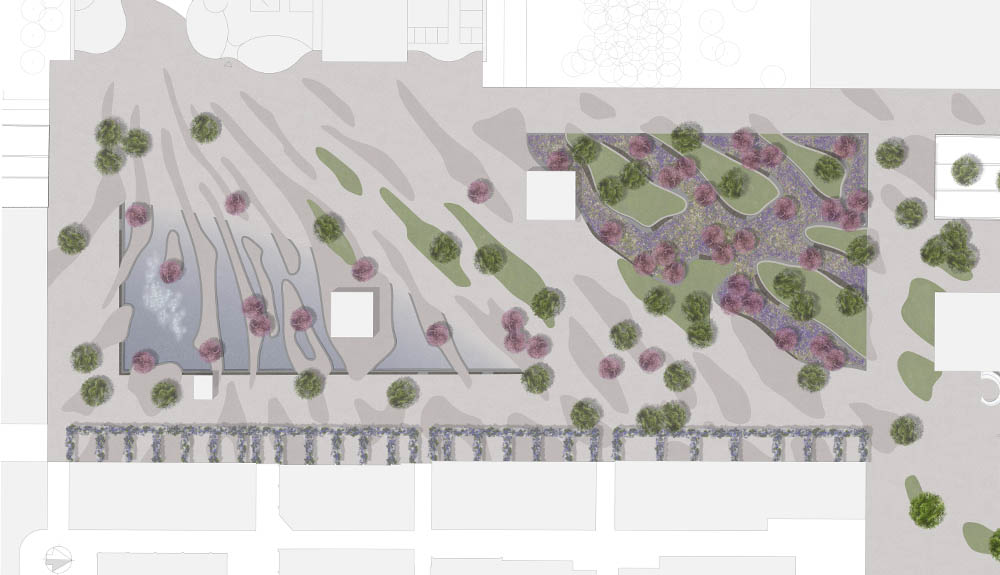 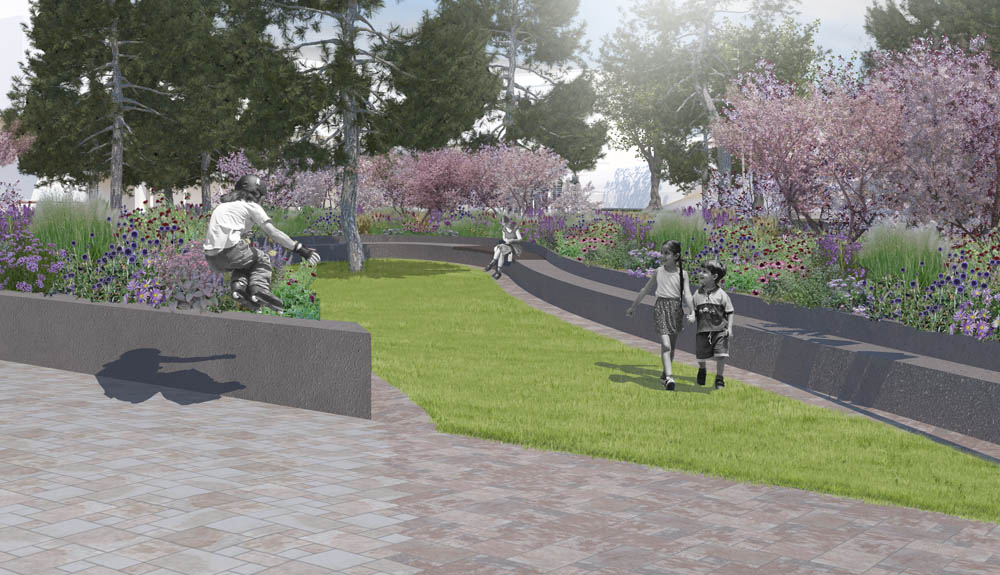 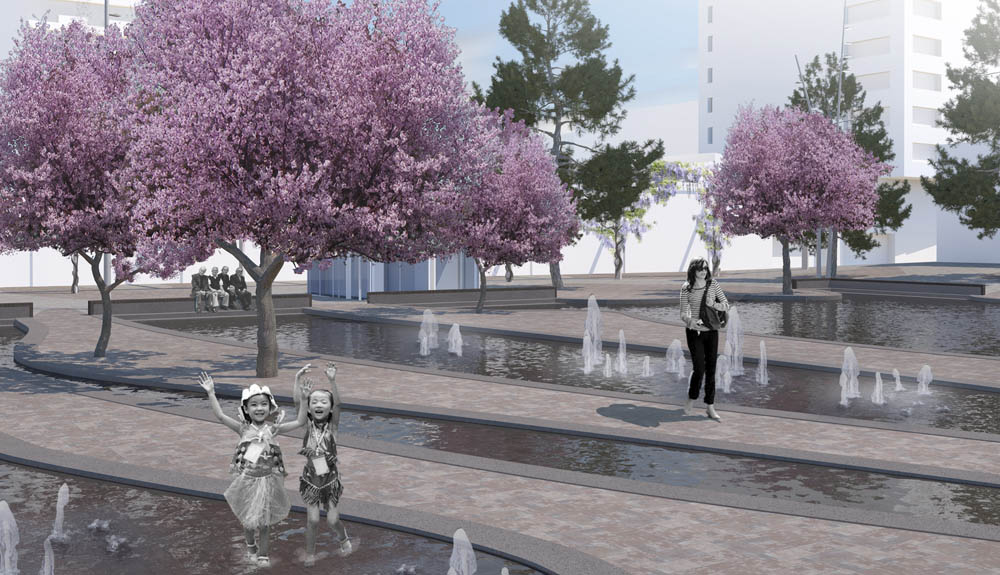 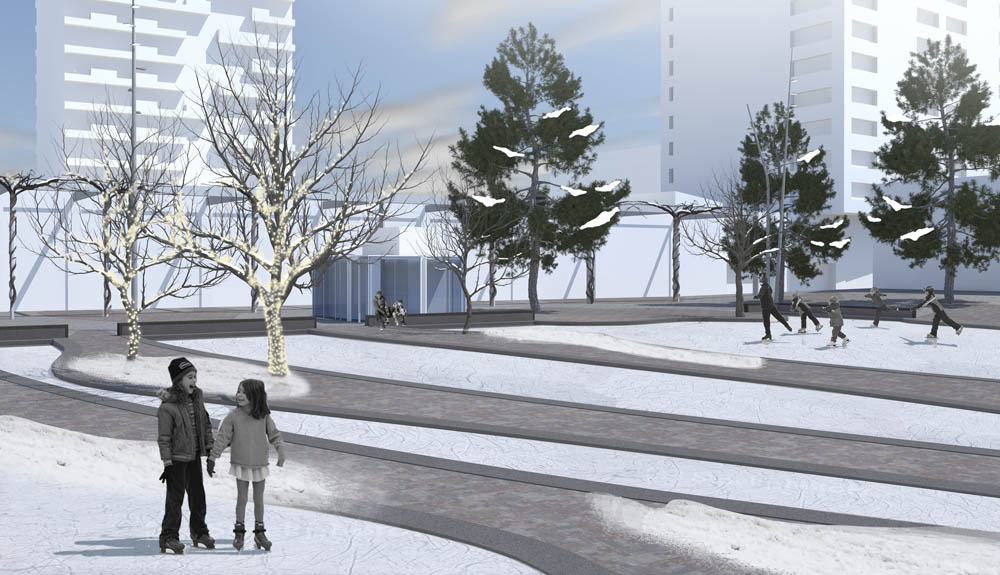